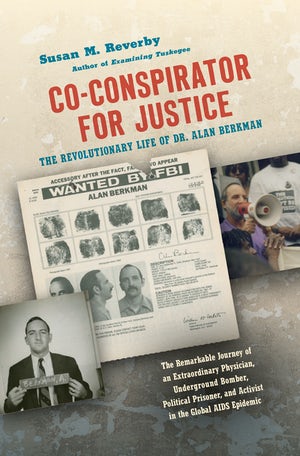 In addition to a prologue and coda (each of 5 pages) and 73 pages of end of book footnotes, the bulk of Professor Susan Reverby’s Co-Conspirator For Justice book consists of 16 chapters, divided into four parts (each containing a 2-page preview) that reflect the author’s political belief that Dr. Berkman’s “life embodied a form of solidarity that crossed all the usual lines as he continually negotiated the use, and negation, of the privileges his gender, class, sexuality, and race gave him;” and that there were “four parts of his journey: conventional upbringing, move toward political extremism, imprisonment of the worst kind, and recommitment to meaningful global political actions.”

Part 1, titled “Eagle Scout, Fraternity President, Doctor,” consists of four chapters that provide readers with some information about Dr. Berkman’s family background and what he was into while growing up in Middletown, New York and attending Cornell University as an undergraduate; before he started to become more politically radicalized, after enrolling at Columbia University’s institutionally racist College of Physicians and Surgeons medical school (which then accepted only “two Black men, one of whom was Nigerian,” in Dr. Berkman’s class of 1971) in Washington Heights, in the fall of 1967. And in a chapter titled “Dr. Salk or Dr. Lenin,” readers are told that in 1971, Dr. Berkman “was asked by individuals in the political underground connected to his Columbia friends if he would be willing to help out people who were formally in Weatherman,” he “quietly said yes” and he would then “see people in clandestine circumstances,” during the 1970’s.

Chapter 4 in Part 1, titled “Political Medicine,” is the most important chapter of this part of the book because, in its “New York To Wounded Knee” section, it recalls how Dr. Berkman, Barbara Zeller and a “political friend nurse,” brought medical supplies to the American Indian Movement [AIM] activists occupying Wounded Knee, South Dakota in 1973 and spent around 8 days with the AIM protesters “providing rudimentary” medical care; and it also indicates how Dr. Berkman was further radicalized, personally and politically, by what he experienced at Wounded Knee.

Readers who were politically active in the anti-imperialist left U.S. movements of the 1970’s, 1980’s and 1990’s will probably find Part 2, titled “Into The Struggle” and Part 3, titled “Life And Near Death In The American Gulag” of Co-Conspirator For Justice to be the most interesting parts of the book. Part 2 includes (besides its preview) five chapters, with the following titles: “Revolutionary Road”; “The Left of the Left”; “Creating Life, Choosing Love”; “Violence, Death, and Their Consequences”; and “Clandestine Actions”. And Part 3 includes (besides its preview, that’s titled “The Government Strikes Back”) four chapters with the following titles: “Becoming Brother Doc”; “Isolation and Rethinking”; “Resistance Is Not A Crime”; and “A Conspiracy for Life”.

According to chapter 5 of Co-Conspirator For Justice, when the U.S. anti-imperialist leftist Weather Underground Organization [WUO] released its collectively-written book, Prairie Fire: The Politics of Revolutionary Anti-Imperialism in July of 1974, Dr. Berkman “was critical of Prairie Fire’s final draft and its politics” and “did not plan to be part of what was being called the Prairie Fire Distribution Committee.”

Yet, according to the same chapter, after spending “several months over the summer of 1974 at the Lowndes County Community Health Clinic in Haynesville, Alabama,” Dr. Berkman was “recruited by what the Weather leadership now called the Prairie Fire Organizing Committee or PFOC” and “asked to take a leadership role in the Northeast.” And in the fall of 1975, “the Weather leadership asked" him and another PFOC organizer “to be two of the five national organizers for what would be called the `Hard Times Are Fighting Times’ Conference,” that was held in Chicago between Jan. 30 and Feb. 1, 1976, which attracted over 2,000 U.S. anti-imperialist Movement activists and supporters (and was reported on extensively by U.S. leftist journals and newspapers, like the now-defunct, then-Manhattan-based, independent radical U.S. left weekly Guardian newspaper).

Chapter 6 of Professor Susan Reverby’s Co-Conspirator For Justice book then describes how, following this conference, former PFOC group members in New York “formed the above-ground group they called the May 19th Communist Organization;” and that Dr. Berkman was “one of the few men who remained in May 19th” during the late 1970’s and early 1980’s. But Professor Reverby (who received a first batch of de-classified FBI “May 19th Communist Organization” surveillance files in April 2019 and a second batch of de-classified FBI “May 19th Communist Organization” files in October 2019) notes that “the FBI began to track the group” in the late 1970’s; although this group of politically dissident U.S. Movement activists included “probably fewer than 100 people.”

After he became “the attending physician for imprisoned Puerto Rican militant William Guillermo Morales” and Morales later escaped from the prison ward at Bellevue Hospital in May 1979, for example, Dr. Berkman was, according to this chapter “brought under the watchful eyes of the FBI;” and “the FBI records on May 19th repeatedly reference Alan’s purported role in Morales’s escape.”

(end of part 2, to be continued. This article was originally posted on the Upper West Side Patch website)