While The Oceans Heat Up

Why Artists Protested At Museum of Modern Art In 1969

In their 1969 manifesto, Jon Henricks and Jean Toche of a late 1960s Movement art action group explained why they decided to historically protest inside Midtown Manhattan's Museum of Modern Art [MoMA] on Oct. 31, 1969:

"We demand that the Museum of Modern Art decentralize its power structure to a point of communalization. Art, to have any relevance at all today, must be taken out of the hands of an elite and returned to the people. The art establishment as it is used today is a classical form of repression. Not only does it repress the artist, but it is used:

"1.) to manipulate the artists themselves, their work, and what they say for the benefit of an elite working together with the military/business complex.

"2.) to force people to accept more easily--or distract them from--the repression by the military/business complex by giving it a better image.

"3.) as propaganda for capitalism and imperialism all over the world. It is no longer a time for artists to sit as puppets or `chosen representatives' at the feet of an art elite, but rather it is the time for a true communalization where anyone, regardless of condition or race, can become involved in the actual policy-making and control of the museum...

"...Today the museum serves not so much as an enligtening educational experience, as it does a diversion from the realities of war and social crisis. It can only be meaningful if the pleasures of art are denied instead of reveled in. We believe that art itself is a moral commitment to the development of the human race and a negation of the repressive social reality. This does not mean that art should cease to exist or to be produced--especially in serious times of crisis when art can become a strong witness and form of protest--only the sanctification of art should cease during these times."

And on November 18, 1969, the same Movement art action group stated the following in a second manifesto:

"We as artists feel that there is no moral justification whatsoever for the Museum of Modern Art to exist at all if it must rely...on the continued acceptance of dirty money. By accepting soiled donations from these wealthy people, the museum is destroying the integrity of art. These people have been in actual control of the museum's policies since its founding. With this power they have been able to manipulate artists' ideas; sterilize art of any social protest and indictment of the oppressive forces in society; and therefore render art totally irrelevant to the existing social crisis."

In a May 7, 1946 New Masses article, titled "Toward People's Standards in Art," the then-20th-century proletarian writer Howard Fast indicated why most of the U.S. literature created by U.S. upper-middle-class writers, published by the subsidiaries of global corporate media conglomerates or praised by U.S. upper middle-class academic literary critics doesn't generally accurately portray the reality of U.S. working-class lives or promote the liberation of U.S. working-class people from institutional classism in the 21st-century:

"What shall we say of the standards of the literary esthetes who rule the highest level of our `modern culture?' I think the best one can say is that in most cases they have no standards at all. Their approach to art has taken on all the aspects of a retreat from life, and avoiding life as carefully as they do, they have a moral fear of putting standards into operation.

"They are at a point now where they are entranced by sound. They worship style. Like children, they cavort at cunning phraseology, and their idea of a high intellectual achievement...is the creation of a second-rate pun. They have adopted a canting and formalized literary phraseology, and they are endowing it with a sacredness very like the ritual of a church. They delight in the resultant confusion because confusion does not place upon them the responsibility of sifting facts for the truth. They are enraged if, perchance, progressive critics should point out that Swinburne wrote revolutionary odes; they value only that part of Swinburne which is sound without meaning, and they value Shelley that way, and Keats too.

"One cannot deny that these critical czars have vast material means at their disposal. Each week they coin hundreds of thousands of words of so-called criticism, and with that criticism they establish their own hierarchy of the great, both in practitioners of art and in works of art.

"But are their great the people's heroes? ...I think not...We have accepted too uncritically too many bourgeois idols...

"We today, in the midst of the struggle, must not forget that the bulk of modern writing is not created by the working class or by friends of the working class. We very often have reason to remember that much of it is created by enemies of the people, enemies of progress, enemies of all that we believe in, and by and large those enemies control the critical standards of today.

"Did these makers of standards approve of Uncle Tom's Cabin?...Did they not malign Dreiser and say that he was a buffoon presuming to art? Did they not condemn Jack London to the hall of mediocrity? Did they not fairly successfully expunge Frank Norris from our literary memory? Did they not deride Upton Sinclair, the early Sinclair whose socialist novels were so magnificent?...

"We cannot depend on them, on their concept of artistic truth or worth...,Before art can be wholly a weapon for us we must understand art, both the art of the people and the art which the enemies of the people create and use in one fashion or another to keep the people in subjugation. And, so long as we confuse these two, the people's art and the art created by the enemies of the people, so long as we bow to the decadents, to the mystics, to the cheap literary frauds, art will not be the weapon we want it to be, and the great people's art...will not come into being...

"The art we embrace comes from the people and, at the same time, it is a gift to the people. The people are not grateful for gifts from fascists and other enemies of mankind. Such gifts are not art by our standards... Only death or the seeds of death are sown by such gifts. Even as the people must some day destroy the last seeds of fascism, so must they reject `art' which leads away from life and toward stagnation.

"And when they do so, a new art will emerge, a people's art, judged by people's standards." 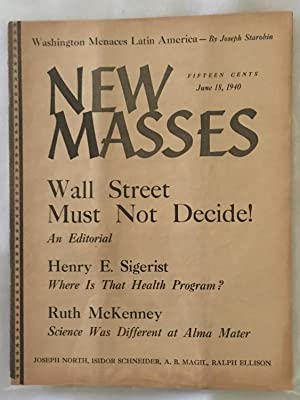